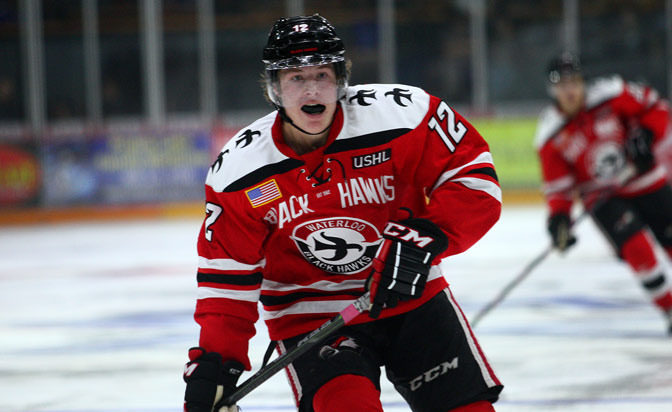 How has your adjustment from Minnesota high school hockey to the USHL been, do you see a big difference?

Definitely how much bigger, faster and stronger the kids are. Another big difference is that the guys in the USHL are much more developed then the kids in high school. In that aspect they play a different style of game.

You de-committed from University of Wisconsin, what were some of the reasons you decided to leave?

Just when signing time came around I wasn’t comfortable with signing there. I just didn’t feel that at that time it was best for my development. So I took a step back and reconsidered my options.

What were some of the other schools you were considering before committing to North Dakota?

I visited Wisconsin again, and I looked at Minnesota, Minnesota Duluth and North Dakota.

What made you finally commit to North Dakota?

The relationship I had with all three coaches at North Dakota. It felt strong there, the facilities are great and they’ve proved over the years that they can develop guys to get to the NHL

You have PK O’Handley, the USHL all time leader in wins as your coach, what sets him apart from other coaches you’ve had?

He’s really different. I’m really close with him. He lets us play, but he expects fully that you need to realign yourself and do your job. He doesn’t sit there and yell at you to do it, he expects you to do it. He’s really psychologic with people, he’s always saying stuff to mess with your mind. He tests you to make sure you’re trying your hardest and doing your best.

Your teammate, Tom Novak is also highly ranked in this upcoming draft, how do you guys push each other on and off the ice?

We have fun with it. I know we’re both highly up there. We both just come to the rink everyday and push each other to get better and hopefully we both go high in the draft.

You were actually traded from the one of the top ranked teams Sioux City Musketeers to the Waterloo Black Hawks, who missed the playoffs, before the season started, do you think your season would have been different if you had played for them?

I think its definitely different cause they’re in the playoffs. I feel like my role would still be the same over there, definitely just producing like I have been over here, but I think the style of play is different over there.

Who do you find are some of the harder players to play against in the USHL?

I think the hardest defenseman is Neal Pionk on Sioux City. He’s really shut me down and done a good job this year. I think he is. No one else really stands out other than him.

You’ve been an assistant captain on previous teams before and captain of Team USA U18 in the Ivan Hlinka Tournament, do you try an take on a leadership role on this team?

What has been your greatest accomplishment in hockey?

I think I’m gonna have to go with back before Christmas break, at the World Jr. A Challenge, we won the gold medal.

What would you say is the strongest part of your game?

I would definitely say my ability to check the puck down low and my shot is really good too.