BAR #2 D Tucker, Tyler (2018) – Tucker played a very physical game along the wall and around the net. He was all over opposing forwards around the paint and made life difficult for those trying to screen and create havoc in front. He laid a massive hit in open ice on Justin Pringle, which led to Tucker drawing a retaliatory penalty. He was also involved offensively and joined the rush several times to try and help create offense while trailing.

BAR #8 LW Chiodo, Lucas (2017) – Chiodo has had a nice season offensively but he struggled tonight. He was pushed off the puck with ease on a couple different occasions and turned the puck over too frequently. He had one great chance late that he failed to convert on and that was the only shot on goal he managed.

BAR #12 D Keane, Joey (2017) – Keane was very good with his zone exits in this game. He hit teammates in stride numerous times and when nothing was available he skated the puck out of the zone and up ice himself. Keane also did a nice job of keeping tight gaps, initiating with opposing forwards as they tried to gain the line and chopping the puck out while engaged.

BAR #19 C Willms, Jason (2017) – Willms quietly had a strong game. He seemed to work really well with Roy Radke in the cycle game and managed to pick up an assist on a play that came from sustained offensive zone-time. Willms was effective pressuring puck carriers and caused a couple turnovers with stick checks.

BAR #26 D Hedberg, Tom (2017) – Defensively he stepped up at the line to force a few dump-ins, which mostly led to easy exits for the Colts. He also broke up an odd-man rush with a good poke check and immediately pushed the puck up ice to get things moving the other way. On one Kingston goal he lost his man and left the weak side exposed, which led to an easy wraparound. With the puck he made some things happen in the offensive zone, particularly on the power play. His passing was very good and he setup teammates for a few good one-timer opportunities. He also showed good edgework and patience walking the line and keeping all of his options open.

KGN #6 D Paquette, Jacob (2017) – Paquette’s game was hit and miss. He did a nice job of getting in the shooting lanes on the penalty kill and showed good speed outskating a couple forecheckers. He didn’t create anything offensively, though, and really struggled breaking the puck out. He missed some outlet passes and also had several dump-out attempts held in at the line.

KGN #13 C Neumann, Brett (2017) – Neumann accelerated very quickly with the puck and reached top speed in a hurry. He was very good skating through the neutral zone and had a few controlled zone entries as a result. Neumann did a nice job distributing the puck and made a really nice one-touch pass to create a good scoring opportunity.

KGN #19 RW Robertson, Jason (2017) – Robertson was fantastic in this game. He was strong on the forecheck and finished defenders off with regularity. He was all around the net from start to finish and consistently fired pucks on net from all angles. He scored a nice deflection goal while up a man and also potted one on a crafty wraparound attempt where he beat everyone to the far post. He was always back defensively and very responsible as a whole. Several times defenders jumped into the play and he was always back to cover for the pinching blue liner. Robertson also showed good playmaking skills. On one odd-man rush, he reached around a sprawling defender to change the angle and get a pass across for a Grade A opportunity when the defender’s sole objective was to take away the passing lane.

KGN #75 LW Nyman, Linus (2017) – He created a ton of offense in this game. He was very creative with his passing using tips, spinning passes, drops, etc. to get the puck to teammates. Nyman showed good hands accepting several poor passes in his feet, behind him, etc. and pulling the puck up to his stick in quick succession. Nyman also did a nice job of navigating his way through tight spaces and making plays when there wasn’t a lot of room. He took a couple big hits, including a check to the head, but still didn’t hesitate to go to the corners or in front of the net.

KGN #77 D Rasanen, Eemili (2017) – Rasanen looked like he was playing in the wrong league. On several occasions, Colts’ players bounced right off him and he didn’t seem phased when runs were taken at him. He did a nice job of moving the puck as he didn’t force any plays that weren’t there and took what was available to him. He did a fantastic job of getting his shots through and shooting for tips. Rasanen also showed good power in his shot as huge rebounds were available almost every time he shot the puck. Defensively his positioning was good and he did a great job of sealing guys off. He used his size, and reach, to steer players wide and it was nearly impossible to move when he decided to pin someone. 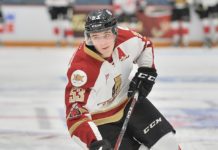 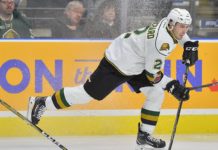 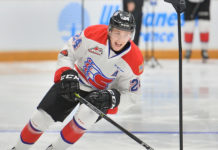