SEA #17 RD Theodore Shea (2013)- Shea played a strong game, the smooth skating defenseman was joining rush trying to spark any offense Seattle could muster up. He played tight in his defensive zone forcing the shooter to the outside keeping the play along the boards where he was strong through out the game.

[sociallocker]SEA #33 LD Hauf Jared (2013)- Jared had a decent game, nothing to brag about he could of used his 6’5 frame with more physicality through out the game. He was caught watching the play multiply times and was unable to recover due to being very slow footed. Jared needs to used his size and reach to his defensive advantage and improve his skating and foot speed.

SEA #2 LD Smith Jeret (2013)- Jeret play a solid game defensively, he didnt really stand out with any flashy play. He was the quite blueliner who played the body, chip pucks and did the little things tonight. His skating and overall skill set does need improvement, but is a player to watch this year he may surprise some people.

SEA #19 LW Sheen Riley (2013)- Riley was a little spark plug all over the ice tonight, using his quick flash to lead the rush, or his shifty skating to sneak into scoring areas unoticed. He showed good offensive instincts with hawk like vision tonight. I was impressed with his play, only down side, he is not very big.

SEA #32 RD Green Taylor (2014)- Taylor not only has Chara’s size but also his condor reach. This kid is a giant, and should be using his size to punish his opponents. His overall game tonight was not very good, he got caught pinching and watching all game, but you cant teach size. This young stay home d-man need to improve his skating and overall play. Excited to watch his development over this season.

PORT #3 LD Jones Seth (2013)- Jones played a overall decent game tonight, he joined the rush looking to help the offensive threat. At times it looked like jones was set on cruise control, going through the motions. I would of like to see him be more physical. His hockey abilities are top notch, he shows a good understanding of both side of the puck.

PORT #27 RW Bjorkstrand Oliver (2013)- Oliver started out kinda flat during the 1st period, then caught on fire in the 2nd and 3rd. I was impressed with his offensive instincts, his ability to slide into the quiet areas of the ice unoticed and deliver a nasty wrister or pin point pass. Oliver notched 2 goals and 1 assist +3 tonight.

PORT #19 C Petan Nicolas (2013)- Petan was the best player on the ice tonight (1g 3a +4), he used his speed all night causing havoc on seattle defense, petan is slick and slimy always winning loose pucks and battles along the boards. His quickness with dazzle you and his ability to handle pucks in traffic makes your head spin. Petan may be small but has the total package. Ty Rattie (St Louis) has found his wing man for the year.

PORT #4 RD Hanson Joshua (2013)- Josh didnt stand out to much, but thats because he was doing the little things to help his team win. Josh is a stay home d-man who i would call the silent professional. I dont see much offensive production with josh, but you got a rugged player who will do anything for his team. His skating needs some work and could play more physical.

Port #29 RD Vorobyev Kirill (2013)- Kirill was another player who i didnt notice much. He has good skating ability and love to join the rush. He does get caught low in the offensive zone trying to create to much. He has all the right tools, just need to get out the filer and start sharpening.

SCOUTS NOTES- Seattle started out strong in ther 1st period taking control of the game and knocking Portland back on thier heels scoring the first goal. Then the sleeping giant work up, and Portland evened up the score. Seattle forgot a complete hockey game is 3 periods and didnt show up for the last two. Petan and Bjorkstrand took over the game and all Seattle could do was watch the show. Portland put nothing short of a beat down, peppering Seattle goalies for 44 shots and 6 goals. Final Score Portland 6 Seattle 2 [/sociallocker] 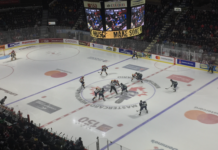